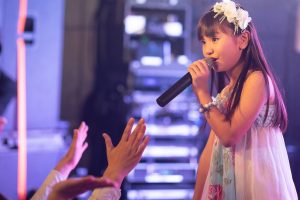 May 9th is Yune’s birthday and she turned 10 today. To celebrate here’s a selection of Yune’s performances from the last year. As Yune is very fashionable, lets also look at the brands she was wearing! Thanks to the people who filmed these.

At the end of April 2018, Yune performed at a special event for young solo singers. Against 13 other idols, she won “Best Performance” for this song.
Song: Welcome to Japari Park. Top, shoes: Earth Magic, shorts: Roni

Song: Hatsukoi Cider (First Love Cider). A very popular song for idols everywhere. She gets some strange feedback on the last note somehow…

Yune was helped by her backing dancers from time to time this year. Here they were performing at a summer festival.
Song: Summer Time Love

To finish off this selection, let’s go back another year: Yune’s first (?) video appearance at a live event. Already showing promise at just 8 years old, but her progress from then until now has been amazing. Let’s wish her the best for the year ahead!
Song: Secret Base (What you gave). Yukata: Angel’s Robe

Yune creates her own choreography!